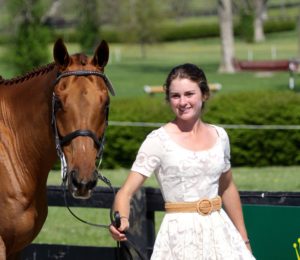 Kaitlin Clasing (Spurlock) grew up in the heart of Virginia’s horse country. Her first forays into riding took the shape of day long pony rides through the woods with her mom enforcing only one rule: rider and pony must come home together! These informal beginnings belied the greater lessons in horsemanship Kaitlin received at this young age. Her parents, both equine vets, instilled in her a deep appreciation for all aspects of horse care that she carries with her today. Kaitlin was also an active member of Loudoun Hunt Pony Club throughout her childhood, eventually obtaining her ‘B’ rating.

Her passion for horses eventually settled on the sport of eventing where she received guidance from eventing great Phyllis Dawson. Kaitlin spent summers at Dawson’s farm, Windchase, as a working student. Here she was exposed to all aspects of the sport from competing at the top level to breeding, breaking and producing top prospects. In 2008 Kaitlin graduated high school determined to further her education both in academic and equestrian realms.

Kaitlin balanced full college course loads with any and every opportunity to expand her horizons as a rider and horseman. This led to a variety of experiences including a winter spent riding for FEI ‘O’ judge Linda Zang in Wellington and several years spent galloping racehorses at the Montpelier training center. In 2012 Kaitlin graduated with honors from the University of Virginia. Kaitlin’s desire to learn from the best led her to a position at Phillip Dutton’s True Prospect Farm in West Grove, PA. Under Dutton’s guidance Kaitlin stepped up to the Advanced level with her own mare. Kaitlin worked for Dutton for three years, a truly invaluable experience where she learned the ins and outs of a world class operation.

Kaitlin brings a highly organized and detail oriented approach to Clasing Equestrian, both in the training of the horses and their day to day management.